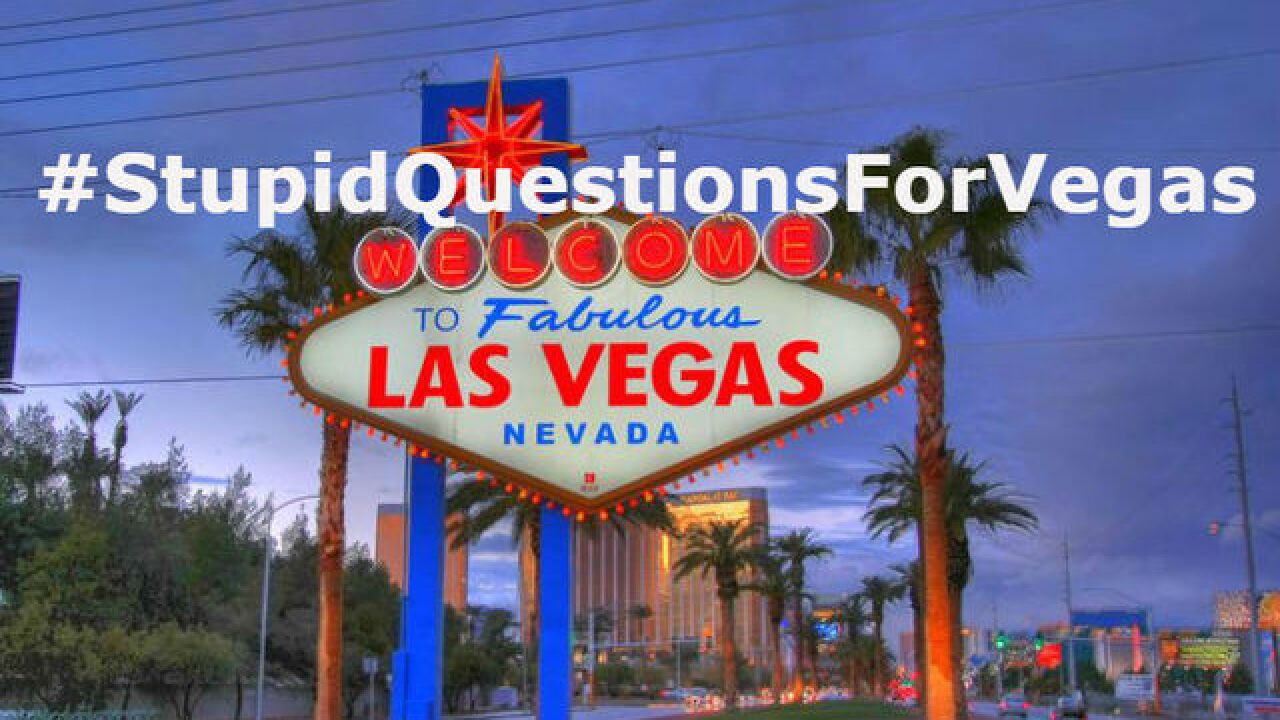 If you have lived for any length of time, you've probably heard plenty of stupid questions. For some reason, many people any other parts of the country assume that the only buildings in Las Vegas are hotel-casinos and strip clubs and assume that everyone lives at a hotel-casino or make their money shaking their bums.

But those aren't the only misconceptions about Las Vegas. Some of those misconceptions were revealed when #StupidQuestionsForVegas began trending on Twitter on Tuesday night.

Click here to tell us the silliest question you have ever heard.

Here are a few:

How can you guys afford to give away so many free drinks?#StupidQuestionsForVegas

You obviously have not been to Las Vegas lately. There is no such thing as free. Several hotel-casinos have put in fancy little machines that decide when you get a "free" drink and they have started charging for parking.

#StupidQuestionsForVegas If I visit one of those “bunny ranches”, can I keep a bunny? pic.twitter.com/SsbxdfdwvP

Well, that depends on how much you are willing to pay. Seriously, those girls generally aren't hurting for cash and enjoy spending time with clients and being independent.

Is your favorite song “Against All Odds”? #StupidQuestionsForVegas

Nope, the odds are never in your favor. How do you think we built so many hotel-casinos?

#StupidQuestionsForVegas I heard it’s “dry heat” there, what happens when it rains and it’s hot? pic.twitter.com/Iy8CquPZTk

If we’re married in Vegas, are we married in the entire country? #StupidQuestionsForVegas

It is possible to arrange a fake ceremony in Las Vegas. However, if you get a license and go to a legit chapel, you are still married even if "Elvis" performed the ceremony.

So does my DUI and public indecency stay there too? #StupidQuestionsForVegas

That depends. Did you post about it on Facebook? If so, the answer is a definite no. However, there is no reason to drink and drive in Las Vegas. We have plenty of taxis and Uber and Lyft are also popular. And, let's not forget about the Las Vegas Monorail and the buses that run up and down the Strip.

#StupidQuestionsForVegas
How much is it costing to rent the Eiffel tower from France? pic.twitter.com/Gx4iUynh3z

Shhh! Be quiet. They don't know we "borrowed" it. Actually, our tower is half the size of the original. It is 540 feet tall. Paris Las Vegas also has a replica of the Arc de Triomphe, a replica of La Fontaine des Mers, and a sign in the shape of the Mongolfier balloon. They serve pretty good French food too.

Well, Las Vegas Boulevard is only a short stretch between Russell Road and Sahara Avenue. So, it would be a bit silly to think 2 million people are living on a 5-mile stretch. Besides, where would the tourists stay if we all lived on the Strip?

#StupidQuestionsForVegas
Did you run out of room for the word chicken in the middle? pic.twitter.com/5yPM16vRhi

The Golden Nugget was not named after chicken nuggets, despite their deliciousness. The world's largest gold nugget, the Hand of Faith, was actually on display at the hotel-casino up until 2013. Nevada is not only known for its silver mines. Many of our early mining districts produced considerable quantities of gold.

Are they really impersonators, or is one of them the real Elvis? #StupidQuestionsForVegas

There are close to two dozen performing Elvis impersonators in Las Vegas and many more who only perform on occasion or just like to dress like Elvis. However, most of the impersonators are fairly young, meaning Elvis would have also had to have found a fountain of youth.

Personally, we think this guy could be him.

Is the buffet really all you can eat? #StupidQuestionsForVegas pic.twitter.com/QPXYHuRjc6

Yes, but they might ask you to leave if you linger too long or even charge you if you leave too much on your plate. It's also possible to buy a buffet pass which allows you to try multiple buffets within a 24-hour time period.

what do I do first: poker or liquor? #stupidquestionsforvegas

It won't hurt as much when you lose all your money if you have been drinking. #DrinkResponsibly

#StupidQuestionsForVegas
Do casinos have Babysitters in their hotels?

Actually, yes. Many local hotel-casinos have facilities where you can drop off the kids for a couple of hours while you gamble, dine or see a movie. And there are plenty of services in Las Vegas that will send a babysitter to your hotel room. And, some hotel-casinos have babysitters on staff for their high rollers.

#StupidQuestionsForVegas
Where do you store all those secrets people keep leaving there??

Don't go digging in the desert around Las Vegas.

Can I be a part of the Blue Man Group?#StupidQuestionsForVegas

If you got a can of blue paint and talent, yes. They hold auditions fairly often and they are many blue men.

Is it easy to get drugs since there are so many dealers? #StupidQuestionsForVegas pic.twitter.com/9OzWgdReKa

That just made us laugh.

If your so fabulous why don’t you have a Disney Theme Park? #StupidQuestionsForVegas pic.twitter.com/azGaVV9Ll2

Because we have the Marvel Avengers S.T.A.T.I.O.N. instead. And some pretty cool rides on top of the Stratosphere Tower. Oh! And Adventuredome at Circus Circus. What could be better than a theme park indoors?!?!