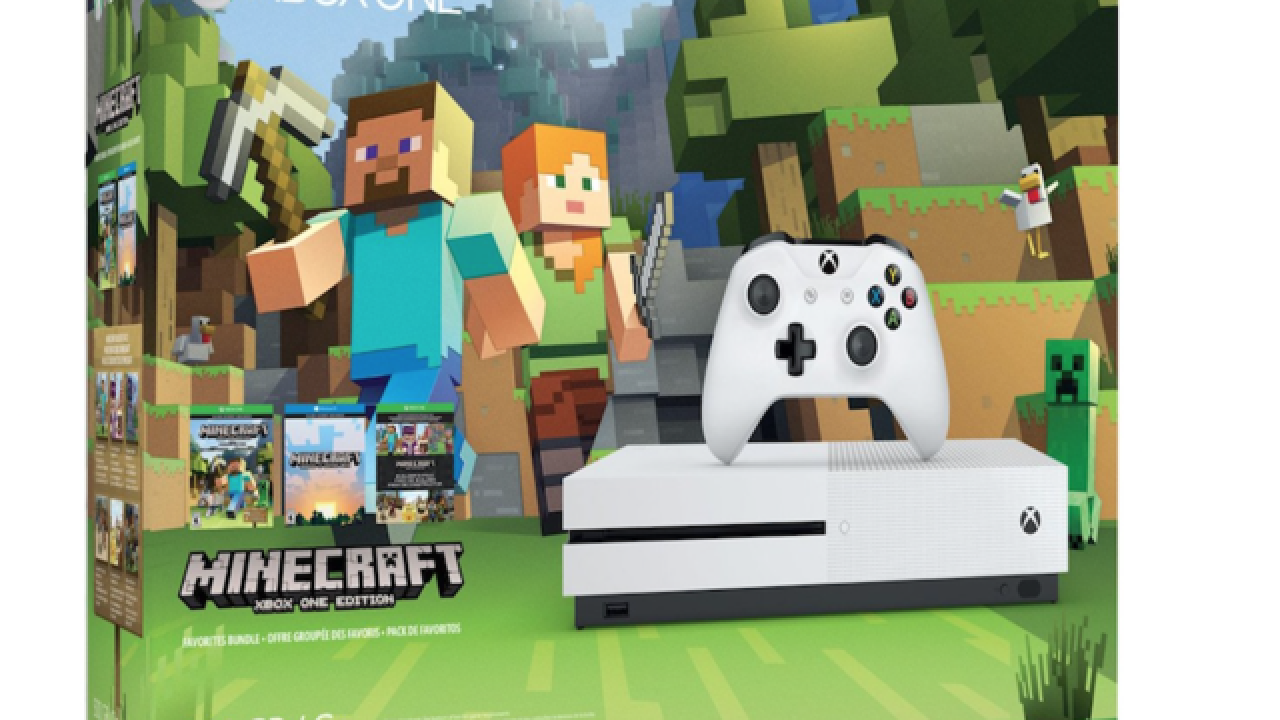 Are you afraid of gaining a bunch of weight this holiday season?

Sitting around playing video games probably won’t help, but it can at least be fun!  Black Friday is the best time of year to shop for games, and whether it’s for some of the year’s best titles, or for an entirely new console, there’s a doorbuster deal to be had for almost anyone.  (courtesy of BFAds.net)

Microsoft gave the Xbox One its first makeover and the result is the 40% smaller Xbox One S.  Aside from its size, it’s the Xbox’s first push toward the 4K UHD revolution and includes HDR support along with 4K streaming and a 4K UHD bluray player built right in.

Black Friday’s bottom line price on an Xbox One S is at Kohl’s this year, where the Xbox One S 500GB Minecraft bundle is the cheapest around thanks to their Black Friday Kohl’s Cash promotion.

Gamers who like to play every hit game released will find that 500GB of storage will fill up quickly.  The best Black Friday deal on a 1TB Xbox One is the $299 Battlefield One SE bundle at Best Buy which includes a free second controller.

Target and Best Buy share the lowest price on the latest entry into the Xbox exclusive blockbuster series Gears of War.  Take cover, shoot stuff, and saw someone in half every once in a while are the rules here, so parents should note the M for Mature rating.

Unfortunately the 4K ready PlayStation 4 Pro is a no-show on Black Friday, but there is a great holiday bundle from Sony which includes the PlayStation 4 Slim 500GB console and Uncharted 4: A Thief’s End.

Kohl’s is sort of ubiquitous this year with their Kohl’s Cash deal, and with $15 in Kohl’s Cash free for every $50 spent, the net cost will almost always be lower at Kohl’s.  Protip: The $249.99 price is a penny away from another $15 in Kohl’s cash.  Find something that costs only a couple of bucks and get another $15 back.

Have no use for Kohl’s cash but wouldn’t mind two free games?  Best Buy is tossing in free downloads of Ratchet & Clank and The Last of Us Remastered with purchase of the PS4 Slim holiday bundle.  Note that GameStop’s ad which appears to have the same deal is a trap; the fine print reads that shoppers may choose only one of these two titles.

Whether fighting through a plague ridden city in Bloodborne, or fighting for survival while being hunted by a psychopath in Until Dawn, the cost of the fight is only $15 at Target this Black Friday.  Parents take note that these games are rated M for Mature.

The king of confusing naming conventions, Nintendo, helps keep it simple this Black Friday by offering only a single sku (in two colors) on the New Nintendo 3DS.  This 3DS hardware refresh offers better control with a second analog nub, better performance, and a more enjoyable 3D experience thanks to eye tracking.  Shoppers should note that New Nintendo 3DS consoles do not include an AC adapter.

With only one option for new stock, The New Nintendo 3DS Super Mario Edition is the way to go on Black Friday if you want a 3D handheld.  Not only is it one of the most stylish 3DS systems ever released, it’s also the cheapest at only $99.99.  Not much competition here, so feel free to choose from a variety of retailers that have this deal including Target, Best Buy, Toys R Us, and GameStop.

Nothing says fun like swallowing enemies whole to take on their powers.  Kirby Planet Robobot takes it to the next level by also letting you pilot mechs in a fight to save Kirby’s home planet of Popstar.

Compete in online objective based combat as any of 23 stylish and unique characters in Overwatch, the first shooter from Diablo and Warcraft developer Blizzard.

Landing on both Xbox One and PlayStation 4 this time around, players return to the battle for the Frontier planets with the help of giant mechs in Titanfall 2.