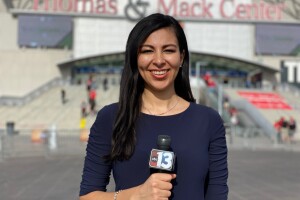 Astrid Mendez is a bilingual reporter/multi-media journalist for KTNV-TV 13 Action News. She joined the station in March 2020.

Astrid grew up in Tijuana, Baja California, Mexico, where she started her journalism career.

Before working for 13 Action News, Astrid worked for KVDA Telemundo 60 in San Antonio, Texas,for 4 years, where she reported and anchored weekday and weekend shows, earning an EMMY award for her coverage of the Sutherland Springs church shooting. She also earned several EMMY nominations for her stories. During her time there, she covered everything from hurricanes and tornadoes to crime and health stories.

In 2014, Astrid became the runner-up finalist for the contest “Dream Job” on ESPN Deportes, where she worked as a sports TV - digital reporter and hosted for several television shows and radio programs prior to the World Cup in Brazil.

When she’s not working, you can find Astrid opening up her passport and traveling. Astrid also loves dancing, hiking, working out and spending time with her family, friends and dogs.

Astrid graduated with honors at Universidad Iberoamericana (UIA) in Tijuana where she majored in Communications. She also attended San Diego City College and studied Radio and Television Communications.

She has been a member of the National Association of Hispanic Journalists (NAHJ) since 2011.

Astrid is fluent in Spanish and proficient in French. She’s really looking forward to connect with the Hispanic community here in the valley, so feel free to reach out to her via-email or on social media!