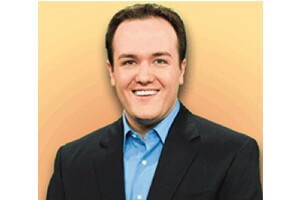 While growing up in Boston, Massachusetts, 8-year-old Shawn entered his local public access TV studio, and never looked back. “I begged my dad to bring me to the studio. I had always dreamt of hosting my own television show!"

Shawn was taught everything there is to know about television, except for how a host should dress. “There was a terrible ‘bowl cut’ stage. Jeans that were two inches too short. Couldn’t match two colors for my life. I still can’t!”, Shawn says.

In 1998, he began his own show, aptly titled “The Show”, where Shawn got his start hosting and interviewing. From Britney Spears to the high school sports announcer, he interviewed anyone and everyone he could get his hands on. He had begun mastering his craft in order to reach his goal of getting paid to talk incessantly.

Shawn graduated from Revere High School in the Boston suburb of Revere, and moved on to The New England Institute of Art where he studied Broadcast Television and Radio, and interned at several stations in the Boston area. “Always, always, always intern. You’ll learn more in your internship than a classroom could ever teach you,” said Shawn, who interned at 4 different television and radio stations.

After graduating in 2004, Shawn landed his first professional on-air position at WLNH-FM in Laconia, New Hampshire, followed soon after by WFHN-FM in New Bedford, Massachusetts. Then in 2006, Shawn moved to the Vegas Valley (for the first time) to join Mix 94.1 as part-time on-air talent and webmaster.

In two years, Shawn was the fill-in producer for Mark & Mercedes In The Morning, won multiple Electronic Media Awards, and even made the Top 5 in Channel 13’s “Great Las Vegas Traffic Reporter Search”. Shawn didn’t win. “I was a little beat up about it, but everything happens for a reason!,” said Shawn, waving his Channel 13 ID badge.

In late 2007, Shawn returned to Boston for the opportunity to broadcast to his home for the first time on WBMX-FM. “Vegas never left me. So many great friends here, but I needed to make the next step in my career.”

That gamble paid off. In late 2008, Shawn scored the co-host position on “The Rhode Show” on WNAC-TV in Providence, Rhode Island, a daily lifestyle and entertainment show. The show put Shawn on the map. From behind the scenes of American Idol, to flirting with Vanna White, and even getting injured by wrestling “Puppet The Psycho Dwarf”, Shawn got the break he needed. “One day my dad said to me, ‘You’re only as good as your opportunities’. That is so true. You can be so ready, and never get the shot. I was blessed to have gotten a chance.”

Now, Shawn in back in Las Vegas and couldn’t be happier! Living in the southwest valley, Shawn is always keeping himself busy, whether here at “The Morning Blend”, DJing at his alma mater Mix 94.1, or taking random drives to Baker, California. “The Mad Greek’s gyros are worth the drive”. And in a stunning twist, Shawn joins Channel 13, where the man who taught him television nearly 20 years ago, works as an editor. “Everything happens for a reason.”